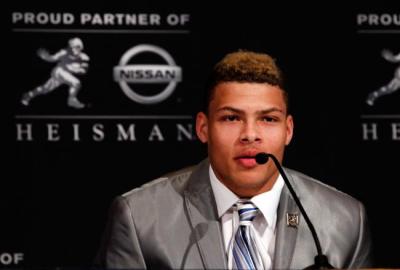 Better days, prior to dismissal from LSU

I couldn’t go anywhere last year without seeing replays of the Honey Badger plastered all over television sets.

Anytime I’m working at one of my restaurants, making drinks or talking to customers, there are TVs running nearly continuously behind my back. I am forever watching ESPN Sportscenter, the NFL channel, local sports programming, or whatever they feel like nationally televising.

And they always televised the games between LSU and Alabama.

I don’t remember all that much about the games between these two teams except they both are in the SEC conference, they both are NFL football factories, and they both play stifling, suffocating, punishing, physical defense (I distinctly remember one game where they combined to score 9 total points).

Oh and one more thing. Tyrann Mathieu, instantly recognizable from the stripe of bright blond dyed hair, aka: the Honey Badger, is a P-L-A-Y-M-A-K-E-R. With a capital P. If you love football, college or professional, then you should at least admire his awe-inspiring football instincts and ability to lay bigger, stronger, faster players out cold.

If you don’t believe me or need a refresher course, check out this highlight reel:

Yes that really happened, and No he doesn’t have a stunt double.

If they paid college players based solely on the number of big plays they made, the Honey Badger would be a millionaire before he got to the NFL. He’s just that much better than the next player.

It’s not everyday that a consensus All-American, Heisman finalist as a defensive player and winner of the Chuck Bednarik award gets dismissed from his team. I don’t think that’s ever happened to someone as highly decorated as him.

Fast forward to August 10th, 2012, and that’s exactly what happened.

I was looking through articles on NFL.com and Bleacher Report when a little box on the right side of my screen said something about him getting dismissed from the LSU football program. I clicked on the link and for some reason my brain refused to acknowledge this as reality.

Could one of the best defensive players in the country, on a team that came this close to winning last season’s NCAA National Championship game, really be getting the boot from Les Miles team? I read every single word on that page. Still in denial. I went to the NCAA.com page, searched for Tyrann Mathieu on Google, Yahoo, random sports blogs. I desperately needed to find something that could refute this statement.

Evidently he has a problem with drugs. ‘Technically’ the Tigers team released him for unconfirmed violations of team rules but I’m assuming, along with pretty much everyone else, that he got tossed for testing positive for marijuana on his blood and urine tests.

Here’s where it gets personal. For people on the outside of this world, living in an innocence bubble, it’s just too easy to point fingers and shake your head at others for having substance abuse problems.

Even people who are in the substance abuse-rehabilitation programs are nearly as bad. Doctors, therapists, counselors, program managers, teachers, these are people who think all kids are cured the same.

Kind of like a one size fits all program, a step-by-step program to curing the want or need for whatever substance their clients are stuck on.

You take a kid who has been hanging out with the wrong people for  a very long time, listening to them, using them as role models and aspiring to become the same type of person. Sometimes there are problems at home, domestic verbal, mental, or physical abuse. Sometimes these problems are genetically linked to the parents, or grandparents, such as documented cases of familial alcoholism.

I can’t speak for him personally, but I know that I have dealt with substance abuse issues for a long time, and no program, no speeches, no campfire atmosphere filled with drug addicts and people with mental issues is going to permanently change your way of thinking in a matter of days or months.

What it really takes to change, in my opinion, is to create an outlet, somewhere you can run to and take solace whenever the stress and fear becomes overwhelming. Drugs and alcohol offer something that nothing else can compete with, a way to forget and erase bad memories and suffering.

Friends and family members can only support you by giving you a reason to continue to live, a better option.

Personally, everyone I knew and everyone I spent any time with made it seem like it was normal behavior to go out and smoke weed, drink alcohol, do drugs. It’s not even a debate about whether my actions were right or wrong, because I figured anyone outside of my circle of friends had no idea what we were going through… what I was going through personally.

Every time I wanted someone to talk to and listen to me I was given a stern lecture about how I should know better, how it could be harmful to my body and my life. Well that’s the pont isn’t it? I never thought I would live past adulthood so that point doesn’t even make a difference. When I woke up one day, having suddenly aged into my mid twenties, I was shocked and confused that my heart was still beating and my body was still in relatively good working order.

To be perfectly honest, I was actually pretty mad at myself. I couldn’t even do a good job of destroying myself. Once again I was a failure at whatever I was trying to do, even if what I was trying to do was to kill myself before I turned 21.

I’ve given casual thought to the merits of whether drowning myself in drugs and alcohol was the same as pointing a gun to my head through one ear, blowing my brains out through the other. If the end result of both is death, and the procedure or journey doesn’t matter, then there’s no difference between them.

I’m not a psychologist, and through the use of drugs/alcohol, I’ve numbed myself to the point that I don’t possess either the required intelligence or want to give myself a definitive answer.

As for the Honey Badger, I’m not as quick to criticize him for a handful of positive drug tests as many people out there are. I don’t think he was trying to derail his blossoming career in football, I just think he didn’t really know any better. Yeah I’m sure he said all the right things when the LSU football program told him that drugs were forbidden but he probably thought he could just do it in private while covering it up with detoxification drinks or masking agents.

Luckily, he and I both found a reason to continue to battle on.

It must have been quite a wake-up call when he found himself without a job, without an education, pretty much living at home, surrounded by a number of beautiful trophies that he would never have the chance to add to. If only someone who give him a chance. Someone who would take him under his wing, give him a positive male role model without asking for anything in return. There was only a slim possibility that he would ever be able to play football competitively ever again, I mean just look at what happened to Marcus Vick.

For anyone who doesn’t know who I’m talking about, Marcus Vick is the younger brother of Michael Vick, the currently on the hot seat Philadelphia Eagles starting QB. Marcus was supposedly as gifted, if not more gifted, then his brother. He played QB just like his brother, and even starred at the same school, Virginia Tech.

His career path careened off a cliff during the last game of his college career, when he stomped on an opposing player’s hand/arm with his cleats in the nationally televised Gator Bowl. Then he got into a lot of trouble, including possession and gun charges, driving on a suspended license and finally went to jail.

Sounds familiar for anyone who has dealt with substance abuse issues, doesn’t it?

Instead of getting drafted in the top 10 like most of the media thought he would, Marcus ended up as an undrafted free-agent to the Miami Dolphins. They didn’t even bring him in as a QB, despite his game tape or prodigious skill. He got signed to the team as a wide receiver, for almost no money. Not surprisingly, he didn’t make it through one season before his once promising football career was over.

In no way, shape or form is Tyrann Mathieu as bad as Marcus Vick was. He doesn’t have a string of criminal charges attached to his resume, forcing potential employers to weigh those against any potential benefit he might add to the team. He might have gone down that path too if not for several players taking time out of their busy schedules to talk to him, to act as a big brother to a troubled yet undeniably talented youth.

Arizona corner back Patrick Peterson, and famous former All-World cornerback Deion Sanders have both taken an interest in helping Tyrann find his way back to the light. For months, they have been tutoring him, talking to him, and most importantly, listening to his problems, relating to him in a way that doesn’t push him into a corner.

For all the problems he has caused, and all the people he negatively impacted by getting himself kicked off his former team, he remains one of the most exciting and interesting players I have ever seen in at least the past decade. Because he is so short (5’8″) and so small (185 lbs), and just so captivating as a character on the football field, it seems that I’m not the only one in his corner.

It’s exactly because he’s so normal in stature that I want to see him do well in the NFL.

As of yesterday or the day before, the Honey Badger was drafted in the 2nd round, 69th overall by, of all teams, the Arizona Cardinals. The same team that Patrick Peterson plays for.

The return of the Honey Badger to prime time television is good for the sport, good for us, the viewers at home, and good for him, his friends and his family. His personality and penchant for making big plays at the most opportune times will make any game he’s in more exciting.

The doors of opportunity opened slightly once again, all he has to do is not mess up and end up like Rolando McClain. 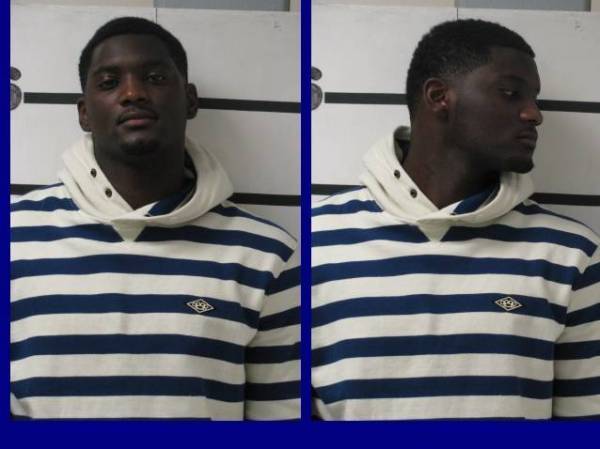 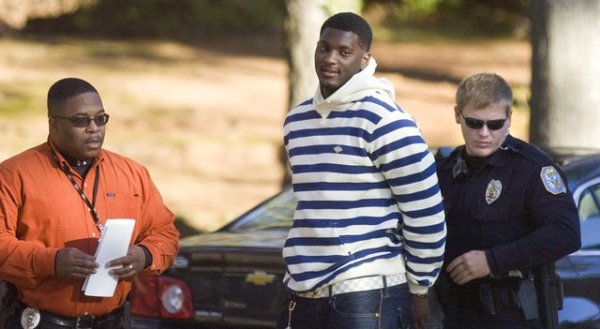 “Can I help you find something?”